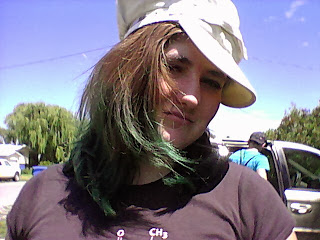 ok, so this picture was taken back during the summer, when i was at dance camp
that morning, some of the girls decided it would be fun to die people's hair using food die, well i thought it would be cool so i let them do it.
it looked AMAZING but....
food die bleeds EVERYWHERE!!!!!!
by the end of the day i had blue EVERYWHERE.
it was SO. BAD.
there's my story for today!

Posted by Unknown at 1:06 PM No comments:

hello again my friends! (you should actually read this for once :P)

hello World! And how are YOU today?
:)
Recently Iv'e been having a bit of a rough time, which is why I haven't been posting much.
But on this blog i'll try to stay positive!
iv'e had some adventures too!
recently iv'e decided that i don't like random gravity checks. especially at dance.
iv'e also spent a lot of time being teased by quite a few people, hahaha love you guys!
(mostly my lovely friends in ballroom :)
i have the feeling that not many people read this, so i have no idea what people want to hear ABOUT from me. give me feedback!
i want to make this blog somewhere people can go for a smile!
much love!
-Car
Posted by Unknown at 12:04 PM No comments:

here's a story of my mood ring for all of you :)
back in May, i went to California and while i was there, i got a mood ring, (it has dolphins on it!)
and iv'e been wearing it ever since :)
well, a while ago (a month maybe?) it stopped working. it was dark colors all the time, meaning that i was sad, or stressed. all. the. time.
but just last weekend it started working again! (and thank goodness that most people i know can't read the mood ring) ;)
much love, i'll post again when i can!
Posted by Unknown at 7:03 AM No comments:

Hey guys!!!
sooo, iv'e been a wee bit busy canning pears.. but it's fun!
weird things that have happened to me recently... hmmm
1) i saw someone over the past week who i'd missed dearly (ok, not weird, just cool)
2) i can no longer walk without my right leg locking at the knee.. (i may have an idea as to why..)
3) i dunno.. you should all tell me some of YOUR weird stories! :)
Posted by Unknown at 4:34 PM No comments:

okay okay okay, so i know i said i would post more, but here's a real life story about me and a longboard...

once upon a cold October morning, a girl was longboarding down a road, on her way home from early morning seminary....
she was going down a street, when she noticed that there was someone else walking UP that same street!
so, she decided, "eh, i can move to the side to make room so he doesn't have to move." and as she went to the side, she was looking at the person passing her, trying to figure out who he was.
since she was paying more attention to whoever he was then the road or her board, she didn't notice the small pot-hole in the road ahead of her until the last second, no time to balance better, no time to swerve.
her front wheels made it over just fine, so she started to breathe easier. just then, her back right wheel caught! she went flying!!!!!
she looked around a moment later, realizing that she had just hit her head on the ground, and that she was a bit scraped up. "no biggie" she thought, but then she remembered the stranger she had been passing..
"Woah! are you okay??" she heard from a voice just behind her...
as quick as she could, she jumped up, got on her longboard and yelled back "yeah! i'm fine, thanks!!!!!" as she got away as fast as she could!
and then she started laughing and hasn't stopped entirely yet :)
The end!
now iv'e got a gnarly bruise on my knee, and some roadrash. it's great :P
Posted by Unknown at 6:43 PM No comments:

Why Hello my crazy minions!
it HAS been a while has it not?
well, i'm going to start posting at least once a week. so no worries!!!
i'll usually post random things that happen around my house, or in my classes, or with my friends (goodness knows there are more then enough crazy things to go around)
although, occasionally, upon request or inspiration I may post something perfectly normal! scary right?
so, i'll also open up requests for stories, rants, whatever!
ready set..... REQUEST!
<3 p="" xx="">
Posted by Unknown at 2:57 PM No comments:

this video is sorta creapy but it teaches a lesson
http://www.youtube.com/watch?v=zl6hNj1uOkY
Posted by Unknown at 2:45 PM No comments:

how can i improve this blog?